We received an email this morning from Shaw Academy, an online learning provider, with the subject header, “Is quitting the key to success?!” Intrigued, we opened it, to find a single image: 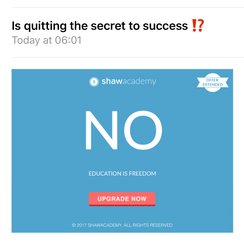 Funny, and a bit clever. But, to be honest, we were disappointed. We thought this was going to be a good discussion as to whether quitting, in fact, can sometimes be a positive thing.

This is antithetical to much of what we are brought up with. Rightly so, we are taught to value grit and determination, and public heroes are often those who refused to give up against the odds. Hence, why Churchill’s words in the Battle of Britain still strike a chord even today. Indeed, grit is being talked of as something that British children, and perhaps all of us, need more of in order to succeed.

Convictions of Honour and Good Sense

Sometimes, though, quitting can be a good thing. Everyone remembers lines from Churchill such as “We will never surrender” and “Never give in”. Few recall an incident from his quite brilliant autobiography, My Early Life (which became a very interesting movie starring Robert Shaw). During his time in the Boer War, Churchill finds himself surrounded, unarmed, and staring down the barrel of a Boer rifle. He then recalls Napoleon’s maxim that “when a man is caught alone and unarmed, a surrender may be made”. This may have been Churchill’s logic behind his oft-forgotten addition to his “Never give in” speech: “except in convictions of honour and good sense”.

On occasion, quitting is simply the better option. The Twitter feeds of entrepreneurs – real and imagined – are filled to the brim these days with slogans stating the importance of failure and never giving in. We have already blogged about the dangers within this thinking. Of course, this is usually well intentioned, since failure can often be only a temporary setback. Sometimes, however, if you keep persistently failing at something with no prospect of improvement, perhaps you’re just not cut out for it, and a reassessment may be in order.

The Science and the Economics of Quitting

The guys at Freakonomics, in their book Think Like a Freak, refer to research by others and themselves on the benefits or otherwise of quitting. One study by Carsten Wrosch, a psychology professor at Concordia University, found that those who quit “unattainable” goals saw both “physical and psychological benefits”, including “less depressive symptoms … lower cortisol levels”, and “lower levels of systemic inflammation”, which is a marker of immune functioning. Further, they were less likely to develop physical health problems over time.

Yet, many people stick out in scenarios when quitting may actually be the better option, for example, those in bad or abusive relationships, in stressful and degrading jobs, or pursuing a failing project where there is little prospect of success. Part of it is a societal bias against quitting, but some of it also sunk-cost fallacy, the idea that you’ve already invested so much time, energy or money into something that you pay no attention the opportunity cost of not quitting.

Overcoming that fallacy, however, is important. No one’s going to praise you for showing determination to fail. Sometimes, quitting can lead to us having happier lives, happier jobs, and making better business decisions.