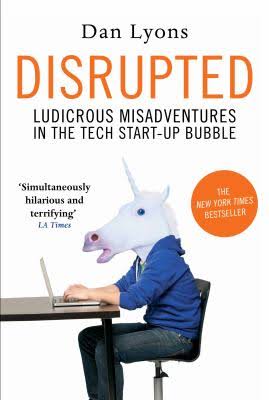 Disrupted was a much anticipated book. The account by Dan Lyons of his time at Hubspot received the best publicity you can get when it was revealed that a number of Hubspot’s executives had illegally tried to obtain a manuscript of the book before it was published. The implication was that this would be damaging. Indeed, there is some damaging stuff about Hubspot. However, the book is a broader statement of concern for the current tech “bubble”, its implications for the labour market, and the economy.

Disrupted is worth a read if only to get an insight into the inside workings of Hubspot. Hubspot is a Boston based tech company that retails a marketing software that claims to help you with digital marketing work, including social media, blogging and landing pages. There are mixed reviews as to its impact. Nevertheless, Hubspot was able to launch an IPO in 2014, and posted $186 million in revenue last year.

The story behind the book is Dan Lyons, a former journalist at Newsweek, clashing with the culture at a start-up, high-growth tech company. The opening chapters are hilarious and slightly terrifying in equal measure, as Lyons paints a picture of a cult-like atmosphere, where young graduates are indoctrinated into the kind of ‘fun’ work environment companies such as Google made famous. It is a strange world with its own abbreviation heavy language, and its own tribe – Hubspotters – rife with Orwellian doublespeak. It’s not spam, it’s “lovable marketing content”. You have unlimited vacation time, but most people take none. There is a 128 slide Powerpoint deck about culture created by one of the company’s founders, who is apparently never around to actually follow it through.

Lyons, however, rails at the hypocrisy of it all. Although Hubspot speak about HEART (Humble, Effective, Adaptable, Remarkable, Transparent) as their core values, Lyons relates a number of examples where Hubspot flagrantly breach them. For instance, although the ‘content’ team may benefit from the ‘Hubspotter’ culture, Lyons spend a good deal of team with Hubspot’s outbound sales team, who are rounded up from colleges, set ridiculous monthly targets, and moved out the door very quickly when they burn-out or fail. Lyons also relates stories about what appears to be a ‘frat-boy’ sexist party culture, which he believes is common among modern tech companies.

Where Disrupted is most interesting is when it talks about the consistent themes in Lyons’ writing, namely that the current massive valuations of new tech companies such as Snapchat, Twitter and now Hubspot is a repeat of the Dot-com bubble first experienced in the 90s. Lyons believes – and is convincing in his argument – that there is a generation of business leaders among the industry who do not care if they build a sustainable business or a sustainable product. The path is clear: get big quick, get an IPO, get rich, all before the bubble bursts. This, he states, is the reason why these companies publicise themselves so much: it disguises the often poor underlying numbers. There are a large number of such companies – Twitter and Snapchat included – that have never made a profit and may never do so. It’s classic South Park underpants gnomes behaviour.

Further, Disrupted articulates Lyons’ concerns that the old contract between workers and employers has broken, and been replaced by “New Work”. At their annual reviews, Hubspot employees are evaluated against HEART, but also VORP (Value Over Replacement Player), a ruthless statistic that determines the monetary value of an employee over a potential replacement. Employees are also paid relatively low wages – although they do get stock options – and sold instead on the ‘play’ culture and the prospect of future wealth. All of this is specifically designed to push wage costs down. The employee gives to the company, but beyond paying wages and any associated benefits, the company has no reciprocal responsibilities.

Of course, there are very few companies that are not always looking at how they can get more out of their workers whilst paying less. What seems to rile Lyons is the contradiction between the playful, friendly face of Hubspot and the like and the way they actually behave.

Unfortunately, Lyons’ valid points are undone by his bitterness – which noticeably increases as the book goes on – and his own at times odd behaviour. Although he does clearly try at times to ingratiate himself with some of his colleagues, he is also perhaps too conscious of the age gap and his different work background, and seems to upset a lot of people one way or another. There are numerous instances where Lyons utters ridiculous, sexist, or even violent things on the grounds that it was “normal” in “the newsroom”. They might well be. But they’re unacceptable in most other places. His continual use of the refrain starts to remind one of the “that’s how we did it in the good old days” line we usually associate with has-beens, exactly the characterisation Lyons is trying to resist.  In the chapter where he escapes to California, he recites how we would be sat smoking “cannabis vapour”, seemingly gloating at the fact he got a “prescription”, not something that will likely endear him to a good number of people. At times, Lyons comes across exactly as Hubspot would have wished to paint him – as a dinosaur, emotionally tied to a faded industry, struggling to get with the times.

This is a shame, as it detracts from – and to some extent undermines the credibility of – his other point about Hubspot and the wider tech bubble. Disrupted is a good read, but it gets frustrating towards the last third. Nonetheless, it’s a useful jumping off point to some key themes in the modern working world that we hope to explore here in more detail as time goes by.