Something distinctly local here now folks. The Worcester News have produced a list of 17 things to do in Worcestershire during the summer holidays. We’re going to focus on Pershore, since we think there’s a lot of people who don’t know what our community has to offer.

Also on the Worcester News list. The former home of the earls of Coventry is a beautiful venue for a day out. Not strictly Pershore, but it’s close enough to qualify. They’ve got a long list of events over the summer designed to keep the kids entertained, including a teddy bear zip wire and archery lessons this Sunday. If you want something more tranquil, just stroll around the landscaped gardens or the historic house.

Also known as Pershore Wetlands, the Avon Meadows is one of Pershore’s best kept secrets. You can get there via the road that leads to Pershore Football Club. A fairly recent community project, dozens of local volunteers and schoolchildren helped dig the ponds, plant the reeds, and construct the boardwalks. The waterways are now full of wildlife, and there’s plenty of places to stop and try and spot them.

There’s plenty of people who walk past Pershore Abbey and have probably never been inside. However, the abbey is a beautiful building of historical significance. Once one of Britain’s biggest monasteries, the structure that now stands is only the monk’s quire, which was bought by the people of Pershore to be their parish church to save it from the Reformation commissioners. The abbey is well worth a close inspection, and it’s a perfect venue for concerts throughout the year.

This ancient woodland is well known for its bluebells in the Spring months. Although these are now gone, Tiddesley Wood is perfect for a walk with the kids and the dog during the summer. If you go during August and early September, you can scrump some plums from the orchard at the back of the wood. This must be why it’s listed as #1 of things to do in Pershore on TripAdvisor!

Number 8 is a community-run venue that hosts a number of events throughout the year. This includes screening the latest blockbusters and indie flicks, as well as community theatre. There is also a charming cafe inside with some great cakes! The listings are all on their website.

A small but interesting look at Pershore’s past, including some great pictures. Located inside the Town Hall on the High Street. 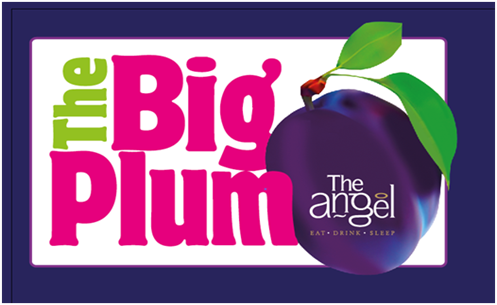 August sees Pershore celebrate all things plum! The crowning event is the Big Plum Festival at the last bank holiday in August (27-29th of August this year), with events held at locations around the town, including the Abbey Park and in The Angel Hotel gardens. The latter features great local ales and ciders, and entertainment all weekend. Since this is a British summer, though, there’s a marquee to keep the rain off and make sure the party goes on!

Phew … that’s just some of them. We haven’t listed the many eating and drinking establishments that are sure to suit your fancy. If you’re in the area, get out and experience some of what Pershore can offer. If you’re from further afield, book your stay at The Angel Hotel are start exploring!